The History of Bath Sword Club

The Club was founded in May 1948 by Commander A G Oliver and its first venue was St Luke’s Parish Hall, Bath. Commander Oliver had 20 years of fencing experience and was the Navy’s 1947 fencing champion. He was assisted by W J Irving who was also an accomplished fencer and the Royal Navy and Royal Marines foil champion in 1928, 1929 and 1930.

After several changes of venue the Club settled at Bath Central Youth Club. There in 1965 the Club acquired its first electric box.
The Club later moved to New King Street for 10 years and in 1975 moved to the Bath Sports Centre. After a spell of 14 years in the middle of Bath the Club moved to Kingswood School, Lansdown. The availability of space, an early start to the evening and the coaching effort provided by an active committee lead to an explosion in membership numbers. Bath Sword became the largest Club in the SW region. In 2003 the Club moved again to the University which doubled the amount of space it could use.

Newspaper clips from the clubs’ past can be found at on this online-library very kindly hosted by the Veterans Fencing Association – http://www.veterans-fencing-co.uk/cgi-bin/bsc_cuttings.pl?FORM=FOLDERS.  Unfortunately this has not been maintained for a while but we look forward to beginning to add more years to the database soon!  If you have any stories or salacious gossip about Bath Sword Club or past members please contact us and let us know!

Coaches Past and Present

The club has had many successful fencers of all weapons and ages and generally is distinguished at home an abroad in the junior and veterans categories.  Two fencers at senior level who have fenced with us who deserve a special mention are Philip Marsh and Piers Gilliver.

Philip Marsh: a Bath Sword Club fencer who made spectacular progress at his chosen weapon of epee.

He joined a ‘Learn Fencing’ class at the age of 11 and then joined the club, taking foil initially. He switched to epee at 13 and started taking lessons from Professor Sue Benney.

In April 2011 he won the World Junior Championships (held in Jordan) at the age of 16 and in the following year,  February 2012, won the Vigor Challenge Junior World Cup in Gothenburg. 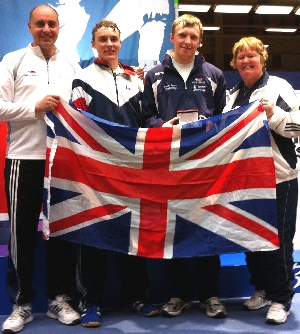 Piers Gilliver is an honorary Bath Sword Club member who trained will Bath Sword club in the years before 2016 Rio Olympics.  Piers is a world class wheelchair epeeist, often ranked number 1 in the word.  He achieved a silver medal at epee in Rio.  He also fenced foil as his 2nd weapon at the games but has switched sabre as a second weapon now.  He has moved on to other training facilities but remains an honorary life member and we expect more good news in 2020!  These are some of our members basking in his reflected glory

The Excalibur fencing tournament is an inter-county event, the biggest in the country. Each county fields teams at foil, epee and sabre.

The tournament was started by Bob Southcombe in 1953. Bob invited 6 teams who fenced each other over 3 days. It must have been a much more leisurely affair! Surrey were involved from the very start and have an enviable consistency of success.

As far as the records show, the competition has always been organised by members of Bath Sword Club on behalf of the South West region.

The tournament is hugely popular and well known in the fencing world. Much of the success is due to Lynne Bornemisza who organised the competition from 1980 to 2014, a remarkable 35 years.She was first involved in the tournament in 1973 when she served tea for the fencers from the canteen and she has been present every year since!

She took over organising the tournament in 1980 and with Bob’s blessing increased the number of counties invited – first to eight then ten and then to 12 which we all agree is the most that will fit into any local venue. The tournament was also reduced to 2 days to add a little more pressure.  The last enlargement was to include Ladies Sabre in 2002 so the total number of fights is now 3564 over a 2-day weekend!